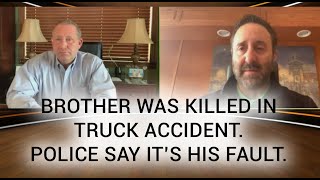 Haley Bianco: It’s that time of the day for “The Law & You”. Joining us today from home, we have attorneys Greg Fellerman and Ed Ciarimboli. Great to see you both! How are your families doing?

Haley: No ones like, you know, killing each other yet?

Ed: Well… as I said the other day, mine’s ready to vote me off the island every now and then, but so far, they’re keeping me around.

Haley: Yes, I’m sure it’s like that in many houses. And you are helping our viewers out by answering their legal questions for free right now. So let’s get to today’s question. From Eva in Berwick, she says “My brother was killed in a crash with a tractor trailer driver last year. The police initially told us that it was his fault. A witness just contacted us through Facebook and told us a different story. Is it too late to do anything?” So, it’s been a year. What do you think?

Ed: Yeah, you know, thank you so much for the inquiry. This is not uncommon. I can’t tell you how many cases, you know, that we are involved in currently where the initial police report – and not, you know, saying the police aren’t doing a good job – but it’s just, they’re working on limited information and sometimes, like in this case when there’s a death, there’s only one side of the story. To answer your question, it’s not too late. There’s a lot of work that needs to be done in order to kind of recreate what happened, but you know, the things that can’t go away – there’ll be some photographs of the car and the truck and we can kind of recreate speed from some of that crush data. We could take a look at the police report and you know, start to put this together for you. And the best thing that you have is an eye-witness. And sometimes the eye-witnesses, you know, their accounts are just absolutely the best evidence, you know, possible. So, no, it’s not too late. Pick up the phone, give us a call on this.

Greg: Pretty much it.

Haley: Alright, so there you go. Reach out to Fellerman & Ciarimboli. You can give them a call, find them online, and on social media. Guys, we’ll see you next time for “The Law & You”. If you have questions, go to PAHomePage.com or give the hotline a call.