Home » The Law & You » Can I Go After My Own Car Insurance for an Accident?

Can I Go After My Own Car Insurance for an Accident? 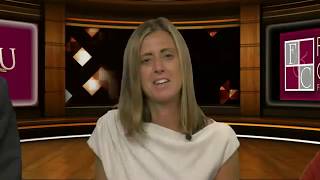 Can I Go After My Own Car Insurance for an Accident?

A viewer was rear-ended by a family friend. He doesn’t want to file a claim against the family. Is it possible to go after his own car insurance instead?

Haley Blanco: It’s what you’ve been waiting for. It’s time for “The Law & You.” Joining us today, we have attorneys Molly Clark and Greg Fellerman. So nice to have you here.

Molly Clark: Thank you for having us.

Haley: Let’s get started with this question. It is a very interesting topic today. This question comes from Craig in Wilkes-Barre. Craig says, “I was rear-ended on 81 South by a family friend and don’t want to file a claim against the family. Can I go after my own insurance company instead?” Alright, interesting there. What do you think, Molly?

Molly: Yeah Craig, the problem with that question is at the end of it. You can’t really go after your own insurance company instead. I think you would have to first pursue the family friend’s insurance company. And then if they don’t have enough insurance coverage, you could then go after your underinsured motorist benefits. So, unfortunately, you have to go after them first. You wouldn’t believe how much this actually comes up and I’ve actually been involved in cases where the defense says, “Oh come on, that was a family friend, that’s going to look terrible in court.” So it has its problems, but I don’t think you have a choice. Greg?

Greg Fellerman: Procedurally though, he could make a claim under the uninsured or underinsured motorist claim first and they would get a credit for the insurance coverage. But it’s kind of disingenuous. Yeah, your insurance company will go, “Wait a minute. What about the guy that hit you?” And that’s a legitimate complaint but I think you could file that first. It’s a little tricky. It’s allowed under the law.

Greg: Well, they might depending on the credits. I think it depends on if there was a minimal policy and depending on your injuries. But it could be done. It’s usually better to make sure you group everybody into that lawsuit. If you’re going to file, you sue the defendant that hit you and your insurance company and make a full claim and try to get full compensation. So that’s that’s what we would recommend.

Haley: All right, some great legal tips today, guys. Thanks so much for your time. If you have some more questions for them, just give them a call, find them online or on social media and you can submit your questions for “The Law & You” at pahomepage.com.