Home » The Law & You » DUI with Questionable Probable Cause

DUI with Questionable Probable Cause 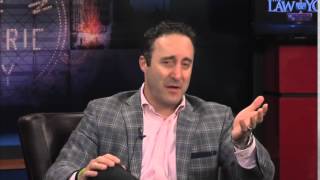 DUI with Questionable Probable Cause

If a traffic stop for a DUI seems wrong, is there cause for a lawsuit? Philadelphia attorneys Greg Fellerman and Ed Ciarimboli explain what legal options are available to one viewer.

Dave Kuharchik: Talking about DUI for this edition of “The Law & You,” joining us now are attorneys Greg Fellerman and Ed Ciarimboli. Guys thanks for being here today

Ed Ciarimboli: I’m going to put you on the spot. Are we going to have a nice May?

Dave: I think that May is going to be transitional. What I will put on record is we’re gonna have a hot summer.

Dave: You’re hearing it first on the Law & You. Alright here’s our question today this involves a scenario for Tom in Stroudsburg that could involve a DUI, “I was pulled over for and charge for DUI and I think the stop was bad. The police video shows me driving pretty straight but when I just over the fog line before I was pulled over. I was taken for blood alcohol and it was .14. What can I do?” Does Tom in Stroudsburg have any form of defense here?

Ed: You know, Tom the answer to the question is, could you mount the defense on this? You could, you certainly could contest that the police didn’t have probable cause to pull you over but if they have a video they have evidence that you are crossing over the fog line. That might be enough for probable cause in this particular situation and then obviously there they have evidence. There’s a BAC or a blood test that shows you’re at .14 so yeah I think he might have a tough row to hoe on this one.

Greg Fellerman: He has a defensible case, in the fact, that he can mount one. It’s not like you have a- you could have a bad stop in the probable cause; reasonable suspicion is the standard there. So what you want, what you gotta do is take a look at the video and then a judge will have to make that determination. There will be a pre-trial motion filed to suppress the stop with the court and the judge will make a determination is that swerve over the line enough. Now there are cases out there that say it’s not; there some cases say it is so it can be very factual and again the video will be very important to introduce that. So the judge will make a determination and if the judge says the stops good then you got a problem because then your blood alcohol is coming in and you’re probably gonna get convicted of that count so it’s defensible. I mean and that’s why you gotta get a lawyer.

Greg: Yeah and then you are going to get sentenced but I mean get to a criminal defense guy, who really knows what he is doing because you have a chance on this one.

Dave: So our viewers who need direction and I know you don’t do criminal law so you will refer them. How can they reach you?

Ed: And there are some attorneys that absolutely do nothing but specialize in DUI law and we could certainly get you to one of them that specialize in this particular area.

Dave: Good deal. Results matter attorneys Greg Fellerman and Ed Ciarimboli. Guys thanks so much for being here.