Home » The Law & You » My Company is Defrauding the Government. What Can I Do?

My Company is Defrauding the Government. What Can I Do? 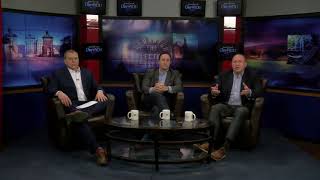 My Company is Defrauding the Government. What Can I Do?

A viewer says his company works for the government and knows it is defrauding them. Is there anything the viewer can do about it. Pennsylvania attorneys Greg Fellerman and Ed Ciarimboli explain how the viewer can come forward to shed light on the fraud.

Dave Kuharchik: So we’re tackling the topic today of defrauding the government. Attorneys Ed Ciarimboli and Greg Fellerman are here. These guys are always on the up and up. Good to see you guys.

Dave: That’s all you have to do, right? And here’s the scenario for this particular viewer. Kevin from Freeland says, “I work for a local company that does government work and I know that they are defrauding them.” So Kevin wants to know what he should do. What’s his best course of action?

Ed: So Kevin, you want to become what is known as a whistleblower. So what you need to do is talk to law firms that handle what is called qui tam cases. It’s a whistleblower case. There are specific law firms, we can certainly refer you to them, we’ve done so in the past. We’ve had a number of cases that we referred out. It’s a very specific specialty in the law. And ultimately, whatever the government can recover as a result of this fraud, as the whistleblower, you stand to recover a portion of whatever they recover being the one to bring this to light. So, whistleblowers can, ultimately, make out very well financially in these cases.

Greg: And they should. The reason they should is because if some company is committing a fraud on anybody — the government, the public — it’s being unfair. Then they want to encourage people to come forward, so that’s why they’re doing the rewarding of the whistleblower. I think a lot of people don’t understand that if you see it, you got to report it, and then eventually you’ll probably be rewarded for it because you came forward and being honest through the lawsuit.

Dave: Good to know that doing the right thing gets rewarded in this case. Of course, if you have a question or a concern, you can give the guys a call or check them out online. Results matter, attorneys Greg Fellerman and Ed Ciarimboli, we’ll see you tomorrow.