Home » The Law & You » My New Couch Has Bed Bugs. Store Refuses to Give Refund. What Can I Do?

My New Couch Has Bed Bugs. Store Refuses to Give Refund. What Can I Do? 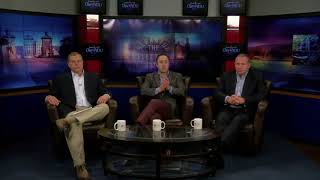 My New Couch Has Bed Bugs. Store Refuses to Give Refund. What Can I Do?

After being sold a new couch, a viewer discovers it is infested with bed bugs. The store refuses to take the furniture back or to give the viewer a refund. Can something be done? Attorneys Greg Fellerman and Ed Ciarimboli explain what can be done.

Dave Kuharchik: Very interesting question tonight involving bed bugs on a couch bought at a store. Interesting. Joining us as always is attorneys Greg Fellerman and Ed Ciarimboli. Thanks for being here.

Ed Ciarimboli: This question kind of skeeves me out a little bit.

Dave: Yeah, let’s get to the scenario and draw you into it. Vince in Pittston says I bought a couch from a local store, so not a hotel or anything like that and apparently the couch has bed bugs. The store won’t take it back or refund his money. What can Vince do about this couch?

Ed: So Vince, I think that only option for you going to be is to go to the district justice. You’re going to need to document this couch is infested with bugs. Photographs, maybe have someone come over, an exterminator, to take a look at it. Have a report. And then you’re going to have to sue the store to get your money back. Go to the district justice level — as long as the couch was less than $12,000, that’s the court system that you’re going to have to go to in order to recover your money because they won’t take it back.

Greg Fellerman: And, you’re never going to believe this. I actually had this case. A guy called me, a former client, I walked him through. We got an exterminator, just like Ed said. He went over, he did the extermination. And he actually had this battle about the couch. It does happen, believe it or not. That’s the second time I’ve seen that.

Dave: And in the event, you run into something that seems a little bit strange and you need some legal help or advice, how can people touch base.

Greg: Call us at 570-714-HURT. See us on the web at 714HURT.com. Facebook Snapchat, a lot of Snapchat lately, all sorts of social medias. We’re out there.

Dave: Easy to get a hold of the team here. Results matter with attorneys Greg Fellerman and Ed Ciarimboli. We’ll see you next time.

Greg and Ed: Thanks, Dave.