Home » The Law & You » Does A Simple Assault Mean Jail Time? 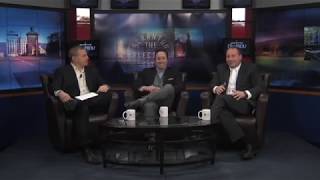 Dave Kuharchik: It’s been a good week here in the month of January with one more additional of “The Law & You” before the weekend begins. We got attorneys Greg Fellerman and Ed Ciarimboli, they’re right here. They’re ready to go. They are excited about this edition of “The Law & You,” guys how are you?

Ed Ciarimboli: Is this clipper gonna get us this weekend?

Dave: Well, we could have a little bit of snow tomorrow.

Dave: We’ll get through it. Let’s get to our question and this involves a woman whose son is in a little bit of trouble. Emily in Bloomsburg wants to know, “My son is 18 and he was charged with simple assault for a fight he did not start. Is my son going to jail?”

Ed: 18, simple assault, as long as it’s his first offense. I’m gonna say no he’s not gonna go to jail. He’s actually probably gonna be eligible for what’s called ARD. If he gets accepted into the ARD program, there is a chance his record could even get expunged in a year, but without more information, to answer your questions, ‘is he going to jail’- no but again you really should get somebody that does criminal work on this because he needs to be represented.

Greg Fellerman: Yeah because he’s 18. He’s not a juvenile, simple assault constitutes an m-2, misdemeanor second-degree; there is a potential for jail time. Generally under the guidelines, he will probably be looking at probation but again with the ARD program out there, he’d be eligible unless a victim objects to it. Again with a fight you may get an objection. With a DUI you don’t have an objection unless there’s an accident, but that’s under discretion of a District Attorney and the county that you’re in. So you definitely need to get a lawyer on this one too because you’re going to court and your son’s rights are at stake so get some representation.

Ed: And he’s record, this will stay on your son’s record forever. So if there’s no aggravating circumstances and you get into the ARD, it’s really, really beneficiary.

Greg: Yeah, yeah. That makes a ton of sense.

Dave: Our viewers who need your legal advice the best way to reach you guys is how?

Dave: We know where Greg is going to be most of the weekend.

Dave: Boy next thing you guys are gonna get those fancy phones now and you are really gonna catch up with the technology.

Greg: We’re working on it.

Dave: And don’t forget if you need a question that you want answered on the Law & You it’s real easy to get us on PAHomepage.com or the Law & You hotline is open.