Home » The Law & You » What Happens if I’m Injured While Hunting on my Neighbor’s Property?

What Happens if I’m Injured While Hunting on my Neighbor’s Property? 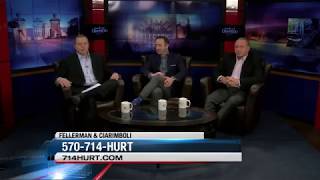 What Happens if I’m Injured While Hunting on my Neighbor’s Property?

A viewer says his neighbor is allowing him to hunt on his property. However, the neighbor warned if the viewer was injured, he would be considered a trespasser. How can the viewer ease the situation?

Dave Kuharchik: Hunting, today, on “The Law & You.” Back with us are the area’s premier attorneys Greg Fellerman and Ed Ciarimboli. By the way they paid me ten bucks to say these things. Good to see you guys today.

Ed Ciarimboli: Before we start I have to wish my daughters Cantessa and Sophia good luck, it’s “The Nutcracker.” So tonight is the tech rehearsal and tomorrow starts the show over at the Dorothy Dixon Darte Center. I strongly encourage everybody to go out and see them.

Dave: That is such an awesome show. Gets you in the holiday spirit. Good luck to them and, of course, Law & You time now. Bill J. in Lake Lehman says, “My neighbor was nice enough to let me hunt on his property. However, he said is I get hurt while hunting that I would be a trespasser. Basically, he doesn’t want the risk of someone getting hurt on his property. What can I do to put the landowner at ease?”

Ed: Well, I don’t- If he’s letting you on the property and letting you use the property it’s- he- you can’t become a trespasser just because you get hurt. It’s not going to change your status. You’re invited onto the property. If the landowner knows something about the property specifically where there’s a dangerous condition, he has an obligation to warn you of it. However, what you can do to kind of relieve him of any obligation is you could sign a release saying that if you are hurt that, you know- basically a contract that you’re not going to, you know, go after him for any damages. That would be, about, the extent of it, I would say.

Greg Fellerman: I think- You know, what I’m sensing is that this landowner in particular wants you to come there but he’s worried about the risks so the release is probably a great way to resolve. It should hold up in court if it’s drafted by an attorney. Again, everybody- this landowner wants you to come hunt safely, but the release would give him some nighttime relief when he wants to sleep. They do worry about getting sued. It’s legit.

Dave:  If you need legal advice or direction, you know the number, you know the web-site, and of course, results matter with attorneys Greg Fellerman and Ed Ciarimboli. Guys, we’ll see you next time.