Home » The Law & You » I Broke My Ankle While Working at a Construction Site. Who is Responsible?

I Broke My Ankle While Working at a Construction Site. Who is Responsible? 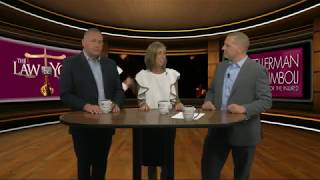 I Broke My Ankle While Working at a Construction Site. Who is Responsible?

While working at a construction site, a carpenter broke his ankle after falling in a hole. There were no warning signs. He doesn’t want to sue his employer but is there another party responsible for the accident? Attorneys Greg Fellerman and Molly Clark have the answer.

Dave Kuharchik: A complicated injury on the job is our question for tonight on “The Law & You” but the team is here to answer it. Attorneys Greg Fellerman and Molly Clark, who’s here for Ed; They’re ready to go. Question time, you ready?

Dave: It’s almost over. We’ll make the best of it with some good legal advice, tonight. Jeff in Throop saying, “I am a carpenter and I fell on a construction site and broke my ankle. My employer is my friend and I do not want to bring a claim against him. There was a huge hole on the site with no warning signs. Is there anyone else that can pay for my medical bills?” Jeff doesn’t want to take this up with his boss because their buddies. Is anyone else responsible?

Molly: Jeff, I think the answer to that is yes, but I don’t know that you’ll be able to get around bringing a claim against your boss, unfortunately. That’s a sticky situation, it’s terrible for you to have to go through that and, obviously the fact that you broke your ankle. The thing is, you boss should have insurance. You wouldn’t technically be going after him, you’d be going after his insurance company. It’s not as bad as you think. In addition to that, because you said you fell in a site, there were no warning signs, there was a hole, whoever owns the property or whoever was the general contractor or manager for this property for this project, you may be able to go after them as well. We’d have to get some documentation , some information, from you as to who’s on first, so to speak, who’s in charge, who owned the land, who was the general contractor, any subs, things of that nature. There may be other people to go after but I think you’re still going to have a workers comp claim.

Greg: Yeah, you definitely have a workers compensation claim. A lot of the times, we get these phone calls where people are- they don’t want to do this because of their boss or because of their job. Let me tell you, if your employer doesn’t have comp insurance, that’s a crime. They’re supposed to have it. They get a lot of benefits for not providing workers compensation. They can’t be sued directly. I know you feel bad about it but at the end of the day you’ve got to worry about yourself, your family, and the rest of your life. With a broken ankle injury, you might not be able to walk right, whatever it is. That’s why there’s insurance companies. That’s why people buy the insurance to protect themselves. Don’t give anyone a pass because they don’t do what they’re supposed to do. It’s really- and we get a lot of that. It’s frustrating.

Dave: If you need legal advice or direction, this is the team to talk to. Results matter with attorneys Greg Fellerman and Molly Clark.